Owning Your Books Makes You Smarter 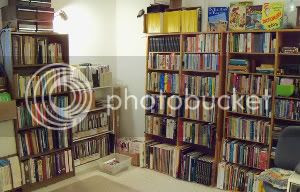 A recent study spoke about kids who grew up with books in the house - booked that belonged to the house, owned by its occupants. The kids are smarter.
http://www.salon.com/books/laura_miller/2010/06/02/summer_book_giveaway/index.html

The study (authored by M.D.R. Evans, Jonathan Kelley, Joanna Sikorac and Donald J. Treimand) looked at samples from 27 nations, and according to its abstract, found that growing up in a household with 500 or more books is "as great an advantage as having university-educated rather than unschooled parents, and twice the advantage of having a professional rather than an unskilled father." Children with as few as 25 books in the family household completed on average two more years of schooling than children raised in homes without any books.

Suddenly we understand how important it is to get books in the hands of children - books that they can call their own. You recall which books you read as a child. If you still had the chance to open one of those books, smell the pages, reread the opening paragraph and closing line, you'd drift back in time.

As a thirteen-year-old eighth grader, I became enamored with J.R.R. Tolkien. I read the trilogy (and the Hobbit) three times in one summer. My bedroom was done up in psychedelic orange and yellow, and I still had hip huggers, body suits and boots in my closet. My hair was down to my waist, parted in the middle, and eight-track tapes were cool. My father was doing a tour in Viet Nam and my mother could do nothing right in his place. A whole scene plays in my head when I touch that book all these years later.

But there's something empowering about owning books, knowing that those words are yours to read, study, reread and dissect at your leisure. It's as if owning the books guarantees you an extra dose of IQ by osmosis. Scoff if you will, but growing up around books gives a person permission to be smarter.

Want to escalate that empowerment in your current household ten fold? Discuss the books you own. Talk about them with your children, your spouse, your best friend or neighbor. Once upon a time it was considered intellectual and socially bright to discuss books. We've become a population that reads less. If talking about your friend's playlist on his mp3 player makes you want to buy music, or comparing notes about a new movie makes you want to buy the DVD, wouldn't the same logic apply to books?

And don't forget - kids imitate their parents. Don't just hand the books to them; appear anxious to read them, too.

I grew up in a disadvantaged home with nothing more than my mom's romance novels to read. Our town was too small to have a library and the school librarian felt it her duty to make sure that I did not read anything "over my head." As a junior in high school, our family moved to a major metropolitan area. I wish I had a film of my reaction when I, for the first time in my life, walked into a public library. A huge, multi-story library, at that. Armed with a new driver's license, that library became my favorite hang-out.
Consequently, my children have it different. Book shelves line our walls. Not one book is off limits to the youngest of child. We frequently read together and they all read on their own.
Thanks, Hope, for encouraging others to provide for their families in this way.

Both of our biological children had their own libraries, in their rooms, from birth! Today both are avid readers, college graduates, and working professionals. I hope they carry on the tradition of books with their own children, someday when they have them! Susan

Great post, Hope. I think it is such a great idea to start a library for your kids, or kids of friends when they are born. No better gift that the gift of books and the things you can learn, as well as the places you can "go."

I have a magnet on my door that says "A room without books is like a body without a soul." I think that pretty much sums up my feelings about this post. :)

My Mom thought having books and reading was important, so I was blessed to grow up in that kind of environment. I passed the reading 'gene' on to my kids; we still have most of the books my kids grew up with. Saving them for the grandkids:)

Great post Hope. My parents were not great readers just Readers Digest, Ladies Home Journal, Sports Illustrated, and the Farmers Almanac, yet I turned out to be a great reader and went all the way to get my Ph.D, so not sure how that fits in with your study. Maybe it was my mom who dragged me to the library to get books out, I loved Hardy Boys books........ce la vie.

Yes, this is so true!

I have reading night in my house on Wednesdays. Only for an hour, and the three kids can read whatever they like, but they look forward to it. We all sit in the loungeroom together and make it a family affair.

Makes a change from the TV.

I just had to comment on this post. I totally agree. My love affair with words and books was cultivated many moons ago through my mom. As a result, I have about 200 books in my home and counting... I much prefer owning to borrowing, be it from the library or a friend, because it allows for future reference. Great post!

Hope, I'm blog-hopping this morning and am so glad to have landed here. I cannot imagine a home without books. I feel lucky to have been raised by parents who lined the bookshelves, by a mother who read to my sister and me, and in an era that was offline. I encourage you to check out my most recent posting: a Seussian fable entitled "Too Many Machines."

aw, I messed up my comment. Anyway, I said that this was not surprising to me, as I studied to be a teacher for a while and this was a "big deal." Also, here in MI, they have this early childhood education program that sangs new parents right out of the hospital room, and they are constantly giving you (bombarding you?) with info like this, sending free books to your house, etc.

One other thing that this reminds me of is what's known in the education world as "cultural capital." Hope's link talks about people being uncomfortable in print institutions such as libraries and bookstores. Parents who regularly take their kids to these places make sure that their kids have no discomfort there. THat is a form of passing on "cultural capital." THere is a really interesting book about cultural capital called Home Advantage.

I also read a study that said that cluttered houses make children more stressed, so be careful of "book explosions" in your home!

When I was growing up during the 1970s and 1980s, books were a big part of my life. You had to use your imagination when you play. Today, though, with all the technology and gadgets they have out there, kids are spending less and less time in books. Using one's imagination is becoming a lost art.

When each new Harry Potter novel came out, my son and I would read them simultaneously, with different bookmarks, leapfrogging past each other to see who finished first. I don't know if he's as fond of those memories as I am.

In Freakonomics, the authors point out something similar to Hope's final point. It's not enough to just shove books into a kids's house -- some school districts have tried. That smart kids have lots of books in their home says more about the parents than the kids. Parents who love reading fill their homes with books and teach their kids by example to love books also.