Sheen is a Smart Lesson - Yeah, That's What I Said 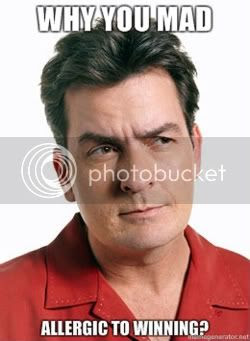 When Charlie Sheen went wild on interviews, I sat back and studied him. Can't deny the drugs. But I also couldn't deny the fact he was doing a phenomenal job, on purpose or not, at nailing a platform. When I mentioned it on Twittter, and subsequently on Facebook, people responded more about his poor behavior, his numbered days on this planet, and his obnoxious personality. I grinned. They made my point.

Everyone knew Charlie Sheen, and most of them paid attention to see whatever he produced next.

He had a following with Two and a Half Men, a hilarious show, in my opinion. But his behavior exponentially exploded those numbers, setting the infamous record on Twitter - a million new followers in a single day.

Whether people studied him for the self-destruction or the humor (some of which is smart as heck), they stayed in touch. He now has a brand, a market, a platform to die for. Hopefully he won't.

So, putting his morality aside, look at what he's done. He developed a following. He capitalized on multi-media. He stayed unpredictable while supplying a steady stream of new material, keeping followers on the edge of their seats. Best of all, even while bashing his employer, he created a positive message - winning.

Empowerment is his message. It's a message that many are hungry for in this economy. These days many folks are down. Hopes are dashed, bank accounts depleted and jobs scarce. The American Dream has morphed into a nightmare for thousands. So when they see someone step out and command that he isn't going to take it anymore, that he is going to be true to himself from now on, it rings true - even from a coccaine addict.

Who's your following? What's your message? And how will you deliver it?

You may not like someone like Charlie Sheen, but you have to admit, he raises the bar on how to deliver a product and keep it exciting.

Sheen's like the elementary school aged kid who says, "Hey! It's negative attention I'm getting when I act up, but at least it's some kind of attention!"

Hopefully he won't crash and burn as he's creating such a large following...

It is interesting that he's selling out his one-man show, without a hint of what the show is. Makes me wonder if the seemingly self-destructive behavior was real. Might just be part of a brilliant marketing scheme.

Mary - I've wondered the same thing about whether it's all just a marketing scheme. I suspect it is, in large part. However, the "tell" for me is that as public tide starts to shift back, Sheen still thinks he's the one telling the joke, instead of the one who IS the joke. I think it might have been a brilliant scheme to start with, but I'm not sure he'll know what to do with it now that he has all this attention. Time will tell.

Great angle on this news story, Hope! I hadn't thought of it but you're absolutely right about his ability to create a huge platform. Whether intentional or not, wowza to him.

Hi Hope! Great post! I blogged about Charlie when all the "craziness" first started. I'm not sure what's really going on with him, but I do hope he can kick his addictions and be well again. I totally agree with you about Two and a Half Men, too...a hilarious show! I wonder if it will ever return...

Hope, Hope, Hope:
Onlyyou could come up with this angle. Did your parents name you before they got to know who you are? I am sure they did but it is hard to believe. You definitely strike again when it comes to the call on this behavior. Personally, I don't think it matters if he is doing it on purpose or not. He saw it all gone, jumped on the horse and said"I don't think so. He was right, so are you, it only matters, to us,( we aren't his parents) that this outcome is able to go this far. Huge possibilities. You are the best. Keep thinking and observing...Jeff Darling-jeffcrafter.blogspot.com