While in St Louis, Missouri at the Missouri Writers Guild Conference a week ago, I was asked if I would do an impromptu interview...on podcast. They struggled with it being live, and recorded it instead. They put it out three days later. I caught myself wincing throughout watching it.

Then I realized that was The Shy Writer talking to herself. Afraid of something different.

My environment is online, in newsletters, on Twitter, on Facebook, and on blogs. It's all about the words I type, and has little to do with my age, looks, voice, or ability to speak intelligently. So when I was pulled into the motel bar, sat on a sofa, and sat smiling clueless as the interviewer set up his laptop on a table and read questions off his phone, I had no clue what to do.

In The Shy Writer Reborn, I talk all about being prepared. Preparation takes away the uneasiness, or at least a major part of it. I was clueless what was about to come at me, so I had to purely wing it...adlib...off the top of my head. Add to that the vague idea where to look or who to smile at, and I sat there nervous as a cat in a room full of rocking chairs.

Sooner or later, when you are a writer in a public setting, you will be caught unawares. Just do your best and rock on. What could I have done if this went badly? 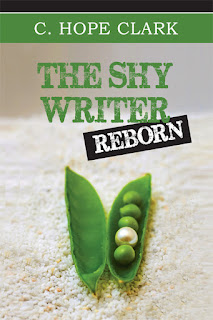 But "went badly" is relative. As I endured the interview, as brief as it was, I told myself these lessons, straight out of The Shy Writer Reborn:

1) What if I wasn't afraid right now? (i.e., If I wasn't afraid, I'd smile, answer questions, and do okay.)
2) After this is over. (i.e., After this is over, I can change into my sweats and kick back on my king-sized motel bed with Roo cuddled against me.)
3) I'm really okay. (i.e., This podcast is minor, and unless I stumble all over myself in embarrassing manner, it will not only be okay, but will be a nice marketing tool.)

Suddenly, I was done with the interview, and I didn't screw up too badly, and I didn't come apart. And I was glad I endured it. That's the thing about introverts who learn to step into the public eye. They are jittery inside, but they develop manners that keep them collected.

Then later...go have a big stuff drink! LOL

Hope--You didn't pick your nose--with your arm up your nostril all the way to the elbow--while you were being recorded, did you? ;)

Anything less than that is not important. I think that 99% of us, when speaking to an audience with no knowledge of the questions that will be asked, will stumble a little (or in my case, probably a lot).

Your words sing across the page. Remember that.

I just saw the video, Hope. Sometimes it's the interviewer and not the interviewee who stumbles. You looked and sounded marvelous.

I think we rarely like watching ourselves. Thanks so very much.

Good grief, Hope. OK, you have giggled less. Other than that, you did a good job, a great one considering the obvious distractions in that room. You came across way better than the interviewer.

Thanks, Janet. I hate giggling! LOL

You did great! The interviewer is the one who stumbled and your beautiful smile and answers were right on.

Hope, I honestly think you did a great job. We always seem to be harder on ourselves. I can relate! :)

Hope - watched the video a I thought you did a great job. The interviewer on the other hand could have used a little more poise. My hat's off to you.

I'm getting used to it, y'all. Thanks for the positive reinforcement.

You know your stuff, and that came through.

You moved well and looked at ease.

Love this post! It's amazing how much I take from your posts about writing to help me with my running.

I loved the "what if I wasn't afraid right now?" quote. I plan to use that for my next race to help me get into a good state of mind before we start.

Thanks, Karen! And I find the same in your running posts! LOL