How We Treat Writers 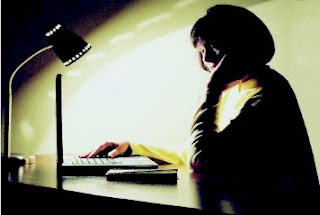 Some of you may not realize that I publish a biweekly newsletter for young writers called WritingKid. It lists a guest article and ten markets for young people to enter or submit to. I pay the guest writers, most of them children, some of them parents and teachers who understand the plight of young anxious writers. Often these young people are not taken seriously. Sure, they can be angst ridden and whimsically trying out the craft of writing to find a means of expression, but don't we all go through that at some time? No matter our age? Heck, I was 44 when I picked my pen back up and returned to writing, enduring the composition of emotional dribble as I sought my voice.

This piece below, from seventeen-year-old Maureen Tanafon, struck home with me. As readers, and sometimes as pompous, envious, or novice writers, we tend to ride others hard, underestimate them, chastise their work a little too harshly not realizing there's a human being on the other end who is fighting against not only editors and readers, but also herself.


There's a person on the other end of those words.

So I begged Maureen to let me express her thoughts here on my blog as well as in WritingKid to young writers . . . to old writers . . . to all writers. To teachers, mentors, and librarians.To anyone who has tried to write, as well as to anyone who's read a story and loved or hated it. To nonwriters who know writers, and don't know what to say to them. To families of writers. To their friends.

There's a person on the other end of those words. He or she tried very hard, pouring weeks, months or years into that piece you just read. It might not suit you, or you may think it droll, but do you have to rip it up because it isn't your cup of tea?

I'm a believer in reviews. However, if I cannot give a good review, I give no review. Just because I didn't enjoy a piece doesn't mean my taste dominates. I'm not a Barbara Kingsolver fan, which in some circles is blasphemy, but it is what it is. However, I don't go around bashing the woman's work. Her success shows her worth.

Just because I didn't enjoy a piece doesn't mean my taste dominates.


When you're holding a book or even a short story in your hands, take a second to imagine the author on the other end who struggled to get the words right. The author who worked into the night, early in the morning, between jobs, to compose a good story that would please you. When somebody gives you a gift, and you don't like it, do you bash him for his effort?

Thanks, Maureen. Your young viewpoint touched my heart, and I wanted to share your lesson, a very adult lesson, to as many people as possible.

You never know what words of yours might touch others.

Recently, on the site Hands Free Mama, I was touched deeply and painfully by one of the articles. It was upon the subject of not missing the chance to know your children; and because my relationship with my own mother has been so broken and difficult, it tore me apart emotionally to read it - a mother speaking with such loving tenderness of her daughter.

I wrote a rambling comment - like many writers, I have issues with restricting myself to small spaces - about myself, my mother, and (among other things) how she had negatively impacted my writing. Without even meaning to, with a few words, my mother destroyed my drive to write for years at a time. There were plenty of other things I said; but the matter of writing, of how I had been harmed there, was a central issue. Writing is life to me, and I was still deeply bitter and insecure about it. Even as I hit the 'post comment' button I was bracing myself, imagining how stupid everyone would think me.

Instead, I found a reply showing up within half an hour. Rachel Stafford, the wonderful woman who runs Hands-Free Mama, wrote back with the most compassionate words anyone has ever given to me. She gave me sympathy, told me that I was insightful and wise - but one line stood out among the rest, made me stop and stare at it.

"I was only a few sentences into your comment when I said to myself, 'This young lady is a writer. You are a writer. Don’t let anyone tell you differently."

This young lady is a writer.

I burst into tears. I grinned like an idiot. I wrote the words down in colored pencil and put it on my bookshelf. A few words. That's all it takes to give writing a severe blow - or to give the desire to write a new, passionate strength.

You could be the one to give those few words. Rachel told me to remember that words had the power to inspire; that you never know when what you're saying is exactly the right thing at exactly the right time for someone. And she's right. Remember that every time someone tells you your writing isn't important, or the doubtful voice in your head tells you it won't matter.

And so is this young lady.

BIO
Maureen Tanafon is a seventeen-year-old writer living in New England, where all the monsters come from. She is almost, definitely, practically finished on the first draft of her first complete book, and has many, many more planned out. She is vaguely pleased by referring to herself in the third person. While not writing you can usually find her drawing, renovating her room, or thinking about writing.

Thanks Hope & Maureen... for these powerful words of encouragement. I had a similar experience when I was growing up ... with my mother's negative attitude towards my writing.

Maureen's words caused me to enter into some contemplative thots...I think The Lord has plans to use these words to close a window...and open the door of my life..to a new season of writing.

My granddaughter is writing her first book...and she's only 11. I didn't know that you had this newsletter for young writers, Hope. I'll have to pass that info along.

Blessing and favor to Maureen..yes indeed! She is a WRITER!

Thanks, Patrina. Maureen is on her way, I think.

So wise. Thank you for sharing her words and for prefacing it with yours. We should take them all to heart.

I was one of 'those writers' who was discouraged so hurtfully in my teen years that I put down my pens and notebooks for a long time. I let the probably-well-intended words of others try to convince me that I was something other than what I had always known myself to be. It hurt, it made me try to create fake paths for my life. Fortunately, I found my way back. Not without trials and frustrations and feeling like I had to justify myself to the people who thought (and still think) writing is "just a hobby."

I wish a valuable resource like your newsletter for young writers had been available during my elementary school days...I knew I was a writer, I admired the accomplishments of authors whose works I enjoyed reading, but had no idea how they got there or how I could find out so I could do it myself. And once you get discouraged, you're afraid to ask...

Thanks again, and to Maureen: Embrace your power, your gift: You're a writer!

How true! Thanks Maureen for the reminder that we can all inspire or help others when we least expect it merely by using kind and supportive words.

I'm sure your words have helped many people! Keep on writing!

Every time I think I don't have enough time to do all the newsletters, and consider canceling WritingKid, I am reminded by people like Maureen that there are kids out there who aren't being helped, who are practically being deterred away from writing. Today it reaches 4500 readers, a lot of them teachers and parents.

I'll thank Maureen, but I think I'd prefer to tell her that I put her post up earlier than expected and see if she'll answer herself. I think we'd all love that.

Thanks so much to all of you for your kind words. I know that I've definitely not been hurt as much as many in the area of writing, but encouragement still means the world to me and I really wanted to get the message out there.
Love to all my fellow writers. <3

Thank you, Hope, for this inspiring post. I was one who became discouraged for many years about my writing until I had a class with a woman who validated me as a writer. Just an encouraging word can make a world of difference. Sadly, family can hurt the most with their indifference or discouragement. Thanks to Maureen for writing about this subject.

We are small rocks dropped in a pond. Everything we say and do makes a difference as it spreads out and touches the world.

Family members discouraged me as a teenager. I never even volunteered for the school paper. I pursued a software career and wrote lots of code, memos, and technical documentation.

The creative writing spark survived decades before I fed the fire. Best of luck, Maureen. Never stop fanning your flame.

What a wonderful post, thanks Hope. I'm so glad you shared Maureen's words. I have only just begun to learn how incredibly blessed I've been to have both parents encouraging me to reach for my dreams, whatever they were, from a very young age. This post reminds me, it's a gift that I can pay forward and be an encourager to other writers. Keep it up, Maureen. I can tell you are a writer, and a good one, from this post. Never give up!

It's wonderful that you are inspiring kids to write and providing the support needed for them to feel valued as a writer. Thank you for your inspiring post, as well.