Do What You Have to Do 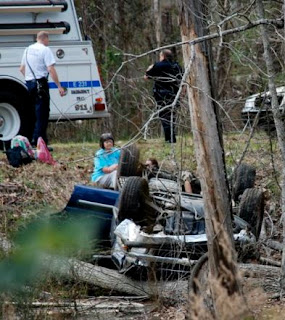 When a saw ducks scattering in the middle of a lazy afternoon, I knew something was wrong. I know my wildlife. My bird binoculars stay handy all the time to catch when the goldfinches arrive or a new woodpecker dominates the feeders. So I grabbed my binoculars and saw a car upside down in the cove, wheels spinning. I grabbed shoes and phone and ran for all I was worth, hearing a tiny, young voice yelling, "Help, our car is upside down in the water."

(**That's me in the aqua tie-dyed shirt, seated on the bank reaching for the two-year-old.)

The babysitter of the two and four-year old girls had missed the curve, missed the biggest trees, thank goodness, and bounced off a smaller tree in the water and flipped, landing on a downed tree that kept the car from sinking into muck and a foot or two of water. They were in shock, but fine. I told them to sit down beside the car and wait, then I called 9-1-1. Once authorities arrived, I carried the two-year old to the bathroom to calm her down, then brought her back to the EMTs and moved out of the way. Cops and firemen took it from there.

I've been deemed the hero of the cove this week. The mother of the girls came by the house a day later to thank me. But I don't think I did anything other than place the call and take a toddler to a potty. So many said they weren't sure they would have run to the wreck, ready to jump into the water, and may have just called 9-1-1 from a distance.

When I speak to groups, I'm often asked questions like:

1. You just decide to do it and proceed.
2. You don't think about NOT doing it.

If I'd thought about being sued, or worried about seeing dead or grossly injured people in a wreck, it would have wasted precious time. Same goes for writing. If I fret over what I might not do right or what might not work, then I waste precious energy that could be spent on moving forward, seeking success.

I'm not extremely successful, as far as some definitions of success go. I do, however, know what I want. I want to be a writer, telling stories and enlightening people with my words for as long as I can. So I keep writing and keep figuring out how to remain a writer. No doubts. No second thoughts. No worrying what people think.

Somehow I think that subtle forward motion without stopping to worry about consequences, is the key.

Wow! It's amazing anyone lived through that. The car looks totally crushed.
You did what you had to do. You didn't freeze and went right into action. Excellent reaction on your part.
They must be very thankful you were willing to help.

Awesome, Hope! I truly believe in adrenaline taking over, and people being able to do things they might not otherwise think they could do....Hmmm....You're right...the same could/does pertain to writing!! You're my hero, in both concepts!

Years ago a knock on the door while cooking supper called me to the neighbor's where the little girl had put her arm through a window, cutting an artery. I didn't think about my little ones left unattended, the fact this girl could be HIV+, or anything but putting pressure on her cut and calling 911. (These children were home alone while drug-addicted parents were at the local bar.) You're right about applying this type of experience to our writing. Once I get going, I'm unstoppable--forgetting food and sleep--until the project is done.

Wow! They were lucky to have you, Hope. I'm glad there are people like you in this world!

I like how you related this post to writing. You're right. Sometimes, if you over think it (instead of doing it), you miss living the life you want to create for yourself.

Wow- thanks for being there for them, Hope. And I loved how you related this to writing. Powerful.

You are indeed a hero. I don't know if I could act without thought of the consequences.

My husband hopped a fence in downtown St. Louis on his way home from work many years ago. to save a preschooler from an attacking pit bull. He heard the screams, saw the kid, and jumped out of his car. I don't know how he got the dog off the kid, but I do know he was covered with blood when he got home. This was before cell phones. A passerby saw him and stopped to call 9-1-1.

He said he never thought twice about the dog hurting him, or the kid having some blood-borne disease. He just knew he had to save that little boy from the dog.

I understand the connection with with writing. I'm too cautious. Too what-iffy. I suppose admitting the problem is half the battle.

I was moved by your story and your writing throughout the entire post. What you said about deciding to do something and then doing it is very important. However, there was something about the way you phrased that last sentence. I had to stop. I thought I would have said it a bit differently: "Somehow I think that subtle forward motion of being [greatly moved by something no matter what it is], is the key. For me consequences of my own actions and how they affect people is important. I want to think about if I do a particular activity, how it will affect the people around me or my audience. But if something moves me to action - moves my spirit, my emotions, my mind - then I have to do it. I see what you mean by making a decision to do something and keep that desire moving a person on to the step of actually doing it. We may have the same ideas in mind, but we each would have written it differently.

So true, Hope. It's about not thinking, sometimes, and striving even when people around you say, "Watch out!" or "Huh?" How wonderful you could be there fearlessly that day and that you can also make such great connections for us in the writing world.

I'll miss your visit to Chapel Hill on the 23rd, as I'll be out of town, but am looking forward to April!