Coming Soon to a Site Near You

It’s an honor to visit Hope Clark’s blog, a resource I’ve sought many times for inspiration and advice. Today I’m here to talk book trailers. Last Saturday, the trailer for my YA novel, How Wendy Redbird Dancing Survived the Dark Ages of Nought, premiered at Flyleaf Books of Chapel Hill, NC.
Check it out. http://lynhawks.com/video-gallery


This mini-film deserved a live event because it was the fruit of much labor and many hands. It didn't have to include great teen and adult actors, an original soundtrack, or a dream-team director, crew, and cinematographer. (Thanks you, Beery Media!) It could have been 30 seconds instead of 2:40 and a DIY project on my computer.
Some could argue my efforts are better spent writing books. But when you self-publish, your books don't have legs like a trailer. How do you get your name out there?
A trailer is nimble. Mine now travels inboxes, blogs, and social media-the animated version of a business card passed hand to hand, generating energy-not my adrenaline needed for face-to-face networking. (Take note, introverts!) When Wendy Redbird Dancing foes on tour, her handler doesn't need a gas fund or a good night's sleep. She can keep things humming from a comfortable seat at home.
A trailer link is an easy forward or share. It's not insistent like a message with links asking someone to buy, so it's easier to tell two friends who then tell two friends. . . You're asking they watc just a few images for a few moments-all the while consuming your book, your name, your brand. And if the trailer gets popular enough on YouTube, it will play like a billboard from outer space. 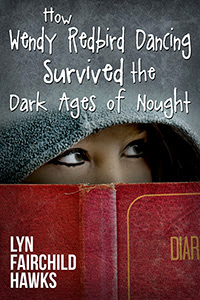 Still, couldn't I have met my goals with something simpler? Absolutely. Many authors make magic with a flip cam, Animoto, or iMovie. I've always been a theater person so a mini-film made more sense, not to mention I reference Twelfth Night and A Raisin in the Sun in my novel. I thrive off the community energy to create something new and the crowd's energy when the show goes up. Now I'm connected to other artists who helped me make a work of art; they've invested. It pays for us writers to think beyond the box of our lone office and quiet heads.
Let’s say you’re up for a DIY trailer. TV writer and novelist Lee Goldberg cautions you’d do better flushing money down the toilet than make an amateurish one. He cringes at “bad stock photos, too much text, and creepy music.” He chose a clever and inexpensive alternative: get his daughter filming, write some witty captions, and sell his identity as oddball, OCD writer—not unlike Monk, his famous character. Author Lauren Kate opted for simple shots of people holding posters, set to moving music—and voilà, a compelling trailer. Meanwhile, author Maggie Stiefvater created her own stop-motion trailer with a soundtrack of original music. Watch her animation of wolves and leaves dance along a shelf full of her books. What makes you unique, that might become a good home movie? Readers love to know the author behind the book.


Writers are good for great captions to walk readers through powerful imagery. Note how C. Hope Clark’s trailers guide us with sharp sentences and deliver a short, gripping synopsis. Author and publicist Arielle Ford recommends your trailer be short with a soft-sell call to action. Keep a quick pace, add endorsements if you have them, and close with a strong finish. Though authors don’t have the iconic brand imagery like the Nike swoosh, you can find and finish with a compelling image and sound to play background to your website URL and contact information. The final image of my trailer is my writer’s dream—the cinematic version of Chapter Two where bullied Wendy tries to survive her high school hallways. Anyone who’s made it through school can relate to this image.

Ford also recommends that you connect through humor or emotion and avoid a sales pitch. If your trailer has the right emotional appeal, it won’t feel like a sales pitch. Director Nic Beery, indie filmmaker who premieres at film festivals and also makes commercials for big companies, knows how to establish mood and evoke emotion. He captured the soul of Wendy. He also understood that my trailer is the classic elevator speech: a logline with its cliffhanger premise, leaving the viewer curious. My trailer makes you ask, Why is Michael Jackson fan Wendy Redbird Dancing on the run?


After the trailer takes a month-long blog tour, here’s what I hope to see:


The numbers I gain from this promotional venture could be small but potent—a few true fans. You may have already heard the concept of 1000 true fans: a group of people who will purchase whatever you produce and can’t wait till your next book releases. Hope Clark’s work has my true fandom.

Lyn Fairchild Hawks is the author of a YA novel, How Wendy Redbird Dancing Survived the Dark Ages of Nought, and a collection of short stories, The Flat and Weightless Tang-Filled Future. She is also author of several works for educators. In the last few years, she has won a James Jones First Novel Fellowship prize and an Elizabeth George Foundation grant. As Lyn is married to a musician, Greg Hawks, and stepmom to Henry, an aspiring filmmaker, their North Carolina home hums with the soundtracks of clawhammer banjo, classic films, and chattering computer keys.