How to Write Southern - Part 3 - Family 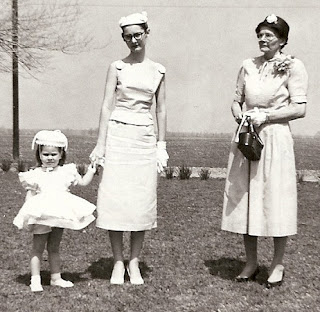 This week, you're enjoying a seven-day discussion of How to Write Southern. Yesterday was Part 2 - Metaphors. Today tosses around the use of family. Remember. . . this is not an I'm-Southern-and-you're-not post. It's more of how to pay attention to locale, culture and voice to pull off your story's geographic specialty.

(By the way, this is a picture of me, my  mother and my grandmother on grandfather's farm, outside Rolling Fork, MS.)

No, I'm not saying that the South cares more about its family than elsewhere. What I'm saying is that family often comes up, creates a problem, impacts reactions, twists thoughts. It's no uncommon for people to ask here, "Who's your family?" or "Are you descended from the Greenville McCormicks or the Spartanburg McCormicks?"

In book three of The Carolina Slade Series (still in edit), Slade steps into a heated discussion and asks for identification.

He gripped my hand like a vise. “Name’s Tucker Shealy. I own a few hundred acres near here.”
I nodded, seeking an ally. “You affiliated with that marvelous barbecue place in Batesburg-Leesville?” The two small towns had grown together over time and become one municipality. Everyone within a fifty-mile radius knew of Shealy’s Thursday specials. Vinegar or mustard based barbecue, fried or barbecued chicken. Worth skipping out on your grandmother’s cooking.
"A second cousin," he replied fast as a bullet, as if he'd answered the question a dozen times too many.

Truth is, in my South, family is never NOT an issue.

It ain't all good.

There's good and bad family, too. Might be old family, new family, married family, someone else's family. But in the South, family usually comes up in the conversation. At least in thought when characters analyze each other.

In Lowcountry Bribe, Slade approached the brothers Jesse and Ren Rawlings in Chapter One. Regarding Ren, she thinks, "He was tall but chose not to appear so, his stoop making him shorter than Jesse. Rumor was he'd been conceived via some form of incest. I fought to hide my pity."

Then, when taking account of Jesse, she thinks, "A man to discuss the weather and commodity prices with, and admire for taking care of his brother."

But the part that helps demonstrate her own family comes across in the description of alcohol. "To this day I drank bourbon thanks to my daddy. The occasional taste for wine came from Mom. My mood dictated which I preferred, which often meant a can of beer just to be me."

I write mysteries. I'm amazed how family is not an issue in many mysteries. If it's touched upon, it's under someone's breath or through a dry mention of being related. What a waste of material! Truth is, in my South, family is never NOT an issue. Whether writing about historical, romantic, scifi, fantasy, literary, mystery or children's fiction, family IS a point somewhere in the telling. Through the sorting of second cousins, aunts, step-brothers, great-grandmothers and parents, we can give new meaning to characters since we all know that family, good and bad, molds us.

You;'re right, Hope. Family can be messy or clean, but everybody has somebody "colorful" in their family, and that bright splash helps round out who we are.

So very true! In my genre, Regency romance, family is as important as it is in Southern fiction. It bothers me to read a novel with no mention of family, as if a character just sprang into being from the ether, with no connections. Important characters need family. Even if we never meet them.

I agree. I think family should be touched upon somehow in most books. Everyone has family. Ever heard of "spawn of Satan?" LOL