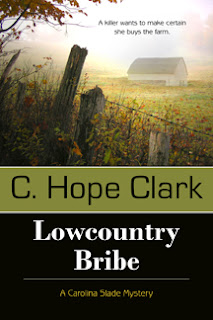 Just received a very nice review on Amazon that included the following:

I love the Carolina Slade character. Clark's depictions of the character's grade school children and the demise of her marriage were realistic. (I wasn't sad to see what happened to her husband, but I won't ruin it.) The blurbs in her newsletter do not do the book justice. Congratulations Hope!

Which made me wonder, where do I draw the line at overpromoting and underpromoting? Just read a social networking blog that stated "Social media experts say promotional messages shouldn’t take up more than 30 percent of your posts." I believe I stay in that range, but I think it's more than that. The actual message has to be more on target, crisp, and lapel-pulling intriguing.

But sometimes you only have a limit (like 140 characters on Twitter), and of course you don't want to repeat your message all the time or people quit reading it. There's only one answer, and it's a hard dictate to accept:

Be original in every place you post about your work.

Not the same old blurb. Not the same testimonials. Analyze feedback from your readers and friends, and extract what worked for them and use it in a new blurb on your blog, Facebook page, Twitter, and guest post. Alter the material on your website periodically, and give people fresh views of what you have to offer.

Friends, I feel like I have a tiger by the tail, afraid to let go. If I do, I sense that sales will slip, so I compose new material daily. I rise in the morning (albeit late morning), take care of obligations, and then work ten hour days way into the night to promote Lowcountry Bribe. But that's because each venue wants a new piece of me, and a new piece of Lowcountry Bribe. Nobody wants the same interview, post, blurb or comment that appears on other sites. And as the owner of a website with newsletters and blogs, I don't blame them. Each of us is striving to be unique.

Yes, you want repetitive advertising, like all the ad gurus tell you to do. However, people can see the cover but read different blurbs. You don't want readers' eyes to glide across the ad and not absorb it. Thus the need to be innovative and new in your promo efforts.

Recall how you looked forward to the eTrade baby commercials? The ones about Allstate and Mayhem? The Budweiser commercials with the frogs? You'd never want to see the same old commercials during the Super Bowl, would you? 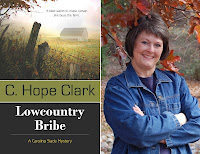 
The IG’s investigator gave me a hard look. “Tell me what Jesse said, Ms. Slade.”
“He said he’d give me ten thousand dollars if I found a way to get him the Williams farm.”
“Did he ask you in those exact words?”
“He didn’t say that precisely, but that’s what he meant.”
“Then let’s start over and you tell me exactly what he said, not what you think he meant.” His pen hand moved furiously across the pad, spreading too much blue ink.
“Don’t toss innuendos at me, Largo. You ought to be glad I’m honest and called the authorities, not dirty enough to take Jesse up on his offer.”
His steel blue eyes held me fast. He leaned back and rolled the pen between his fingers. “Why does he farm if he doesn’t make any money at it? Why do you let him keep farming then?”
My eyes narrowed. “I don’t dictate those half-baked procedures Congress pulls out of the air. I just follow the rules. Farming is damn hard work with ridiculously small rewards. The press eats my agency alive every time there’s a drought, a flood, a freeze or some freak heat wave. We don’t help the farmer enough, or we pour too much money into losing enterprises. I make agricultural loans for a living, and I’m good at it. I follow all the rules to do it.”
He shoved the notepad in his briefcase and stood. Dang, I should’ve mouthed off earlier.
“Tomorrow morning I’ll be at your office around ten with a colleague, Ms. Slade. Tell your staff we’re auditors. After all the agents who snooped around here last year on your boss’s disappearance and Lucas Sherwood’s death last week, a few auditors should mean nothing to them. The less they know the better.”
I saw him to the door. He reversed the car in the driveway and drove off. Overall, I suspected I’d done pretty well chatting with someone who put people in jail for a living, but I didn’t know for sure. And he’d left me with no clue what to expect for tomorrow. Amazing how a farmer’s whims of bribery garnered such quick attention from the IG.
There was a lot more to this than I was being told.

Boy can I relate, Hope. I'm hitting the one-year mark for the release of my novel debut. Those initial months were brutal, and like you, I was afraid to let go for fear the whole thing would just disappear somehow. In time, I found my stride. I now guest blog/interview book-related stuff about once a month, and Tweet/FB updates every few days. That seems to be enough to keep the momentum going forward with fresh insights and information without running me too ragged.

Hope, I read the same article about how much promotion you should be doing and boy, did I re track my steps on Twitter and Facebook. I mean what is an author to say after telling people what we are currently doing? Most of our time is spent promo/marketing our work and I'm glad you agree with me.

As we grow as writers everyday, soon we will discover a healthy balance between advertising and social media that works for us.