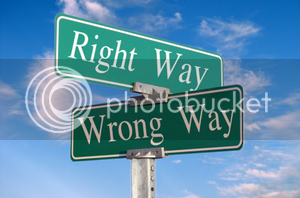 .
As writers, as human beings, we often worry about taking the wrong step, for fear someone will point a finger and accuse you of . . . gasp . . . being wrong! I'm not talking about breaking the law here. I refer to being wrong in someone's eyes, by some unwritten rule, because the majority says so, and the list goes on.

Dare to be wrong.

As I pursued writing and publishing Lowcountry Bribe, I was accused many times of being wrong. Some of the "advice" included:
Well, sometimes you have to do what you feel is right for you. Yes, you want to know the basic rules of writing and the basic guidelines for your genre. But if everyone followed all the rules as written, stories would muddy into each other, diluting so many distinct voices.

I have a friend writing a YA literary fantasy. It's cute as a button! Another is writing high brow, historic romance, and it's sexy as hell. Neither is published . . . yet. I have no doubt they will be, because their work is good. And they've discovered their uniqueness. And they are hell-bent on refining it, making it work, and not becoming "the norm."

Being stubborn is one thing. Standing by your standards is another. While you know what you want to do, don't be deaf to suggestions, and don't be afraid to try change. Just realize that it's all optional. Being afraid to deviate from the norm confines you to a box with thousands of other writers afraid to be different. But also, being afraid to listen to suggestions is just as unwise, as someone might have gone before you and see the cliff you're about to walk off of.

Dare. Dare to be wrong. Dare to try different. Dare to define what right really is.

Come visit Hope's new website -http://www.chopeclark.com - where you'll see the new blog. For a short period of time, these blog posts will be duplicated both here and at www.chopeclark.com, but not for long. Sign up for email updates or RSS feeds, at the new site, but either way, the new blog welcomes you.

Liked this post, Hope. Very good advice. We have to be astute enough to realize when that 'other' advice is not valid for our purposes, i.e., it's not our style.

For me, that's having confidence in my own work, and chosen genre, whether that genre is hot right right now or not. Besides, I'm having fun trying.