The Questions They Ask 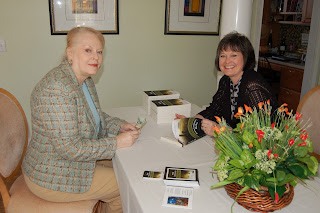 Last night, my generous and oh so sweet neighbor hosted a book release party at her house overlooking Lake Murray. Writers from my critique groups (including local published author Rachel Haynie, Myths and Mysteries of SC, Globe Pequot) showed as did so many neighbors. Sold twenty books, but the best part of the entire evening was watching, talking, listening to people talk books.

And I've learned what questions non-writers want to ask published writers about their novels.

1. How long did it take you to write the book?

Took me 14 years, but I'm quick to assure them that the period included a down time of five years, and the fact I wrote it part-time, molded characters, tossed it three times to start from scratch, and ultimately found my voice. Then I tell them it took me a year to write the second, and another to write the third. Many of these people knew I wrote, but had no idea that seeing lights on from the corner of my house until three AM meant I was spinning stories.

Unless you're writing sci-fi or fantasy, most readers assume a fiction story spins off from something real in an author's life. I explain that the opening scene of the bribe is somewhat real, but the reality of the rest of that situation was boring, so I had to make up the rest.

3. How many of the characters are people you know?

I use the example that my son pouts that I made him a girl named Ivy. In other words, no character is one person I know. If I like a trait in a person, I infuse it into a character, but there is no copycat character. Remember this in case you'd love to write about a person you love or hate, because one day he may not be so happy you personified him in fiction.

4. When's the next book coming out?

Readers are so accustomed to series that they want to jump on the next one. The important point I realized here is that readers do not find authors when they put out their first book. It's usually the second, third, fourth or more. Then they go back and read the backlist, anxious for more. That proved what I suspected. An author has to be in this for the long run, with multiple books to his credit, before making a serious name for himself.

They want to tell their friends where to go get it. Yes, the inclination is to explain that online is the way to do these days, but when people ask you where to buy the book in person locally, and you can't tell them where it is, you run a strong risk of losing a customer. Amazingly, there still is a demand for bookstores to those who do not write and don't care to understand the growth/change/quirkiness of the publishing industry.

I'm learning daily, and it's a fast past and steep curve, but one day at a time this life apres-release date is coming together. Live and learn, and live it with a smile.

I like your revelations. BTW, congratulations on your book.

I don't know why your name always jumps out at me, but it did again. Did you know fundsforwriters.com is mentioned in The Writer, March 2012? It's under Websites & Blogs worth a writer's time.

Congrats, Hope. What a wonderful neighbor you have.

Yes it's funny how people always ask the same questions.. imagine authors like Stephen King getting bombarded with the same questions for decades.. haha.. enough to send a writer to write about those who want to be writers..or crazed fans... ahhh, he did a few of those already...

I enjoyed reading about the questions you were asked. I had to snicker to myself as I tend to want to "over explain" #5. :)

Lyn Fairchild Hawks said...
This comment has been removed by the author.
2:14 PM

Hope, we're very excited that soon we'll get to ask you questions, in NC!